Home / interviews / Black Metal of the Emerald Triangle: An Interview With Lycanthromancer and Skorpius of Miasmic!!

Black Metal of the Emerald Triangle: An Interview With Lycanthromancer and Skorpius of Miasmic!! 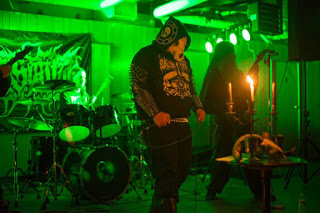 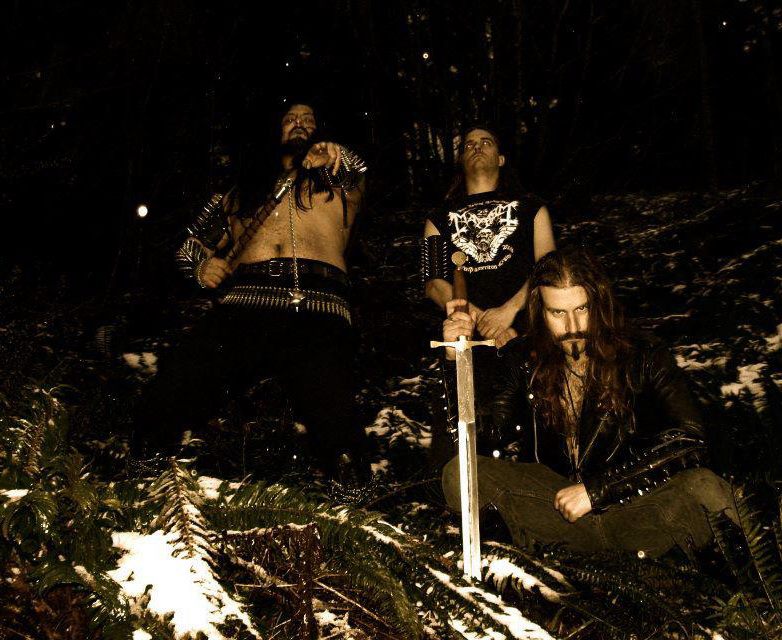 Interview conducted via email in July 2015.
WULF:  From what I can tell, this is your first interview.   You have been in the game for almost 10 years now!   Why so mysterious?  Tell us about yourselves!

LYCANTHROMANCER:  Rising as a malevolent force from the darkness & hoary mists of these ancient Redwoods, ‘MIASMIC’ was forged in the year 2006. Iishtok and Lycanthromancer (then Lycanthropizer) spearheaded the project with previous percussionist, Volkane (aka S.M. Azazel from Unholy Crucifix) as a polemic reflection against the modern world. Black metal was ( and is) the appropriate platform to cast our nefarious onslaught unto the decadent cultural malaise that surrounds us. We began to hone our skills & perfect our craft of audial decimation to contend with the monotonous grain of the collective. Decisions were made and new musicians sought. Skorpius joined our ranks in 2010 & Altar in 2014. We stand unified and disciplined, as disciples of the Miasmic writ.
WULF: According to metal-archives.com, one of your lyrical themes is “transcendence”.   Would you say this is accurate?   If so, can you give us any insights as to what this means exactly?   Also, are there any specific spiritual/occult beliefs that are shared by all the members of the band?   In recent years, it seems like black metal (especially USBM) has begun to split away from the traditional Satanic tropes and motifs of black metal and has become more focused on psychology, philosophy (especially existentialism and nihilism), or simply just nature itself.   How does Miasmic fit into all of this, if at all? 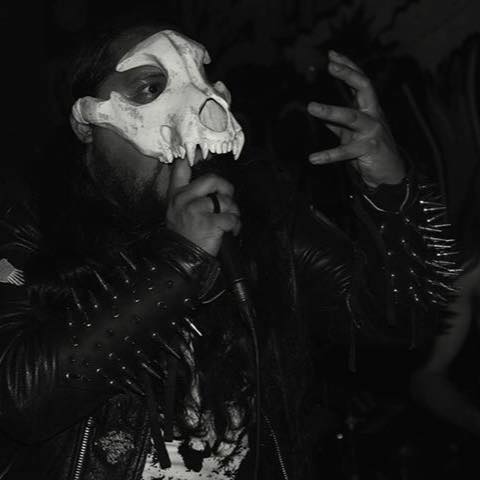 LYCANTHROMANCER: Lyrically we have touched upon the aspect of what lies beyond the corporeal world, those realms not known to the living or that which is unbound to our earthly perceptions. To leave the temporal plane and gain insight & forbidden knowledge into other dimensions that lie just beyond mortal reach. Hymns such as “Gravemoss”, “Ephemeral Lych Gate of the Miasmic Emerger”, and “In a Tomb of Flesh, I am Buried Above Ground” were written about such explorations & disdain for our fettered existence. New opuses such as “Insular Pinnacles & Visceral Divination” have more to do with spiritual ascension. To be seated upon a higher throne beyond time & being, far from the incongruous contemporary world in which we unfortunately inhabit currently. As individuals we have our own varied personal beliefs, we speak for ourselves and not as a whole. We unify under the banner of Miasmic due to our mutual beliefs and interests; self-righteousness, scorn, wrath, extreme music, elitism to name a few is what binds us together as a group. For we are creatures of the same ilk. As far as the traditional sense of “satanic” black metal, this has become more or less a pantomime. A provocative attempt at joining the herd mentality of the “scene”. Now I don’t mean to write it off as such completely for there are those who remain true to a Luciferian or esoteric paragon of devotion, but too many go in halfhearted with such doctrines or are only concerned with the alluring image. Miasmic stands against humanity’s current metaphysical stagnation. Let us be enlightened and attuned with mannaz & resuscitate heathen volition which our predecessors purged through fervent religious swindling. We sonically embody consecration through the path of darkness. 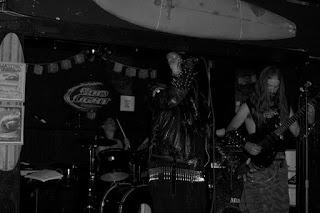 WULF:  Your live show involves animal skulls, candelabras, spikes, and, of course, soul-crushing black/death metal!   Unfortunately, I haven’t personally had the pleasure of witnessing one of your shows in the flesh, but I have good friends who can attest to your powerful live conjuring. What are you hoping to accomplish with these live assaults/rituals?   What would you say to those who are curious about attending one of your shows?   What can they expect?
LYCANTHROMANCER: Ornaments & tools used within our formulae. We seek to rekindle the bestial flame in the hearts of our spectators; adulation is irrelevant, awakening is key.  Macabre substance & barbaric imagery only enforces the affirmation we evoke. Each show a ritual and each song a passage in the tome of our black work. Other extreme manifestations will come to fruition in the near future. For now one can expect cryptic somber ambiance amidst desolate cacophony.
WULF:  Humboldt County is absolutely fucking gorgeous (according to my friends and the internet, I haven’t been there personally).   Is there any specific way you draw influence from nature, such as through exploration, ritual, mind-expanding chemicals (you are in Humboldt, after all 😀 ), etc.? 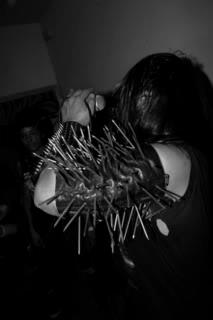 LYCANTHROMANCER: The call of the wild is embedded within our persona. To wander behind the redwood curtain and behold the grandeur of aeons is truly inspiring. We venerate & translate our homage through an audial medium, an ode to the ancients. The wellspring of influence flows from our return to the resemblance of the primeval & exploring the oldest remnants of the land. Whilst we have partaken the psychedelic offerings of the soil, they have served as enhancers to our personal means.
WULF:   I’m always interested in a band’s non-musical influences much more than any musical ones.   Themes, atmosphere, and lyrics should be just as important the music!   Is there any literature/film/non-musical stuff that your listeners can check out that will enhance their understanding/experience of your music?   Also, is there a chance you will ever release the official lyrics for your music?
LYCANTHROMANCER:  Agreed, the literary weaving of mysticism is paramount to the art in which we exsanguinate from our psyche. We have drawn inspiration from the works of Evola, Nietzsche, Crowley, Jung, & Pagan ideology to bate. A nihilistic/ atavist perspective is desired. Whatever stirs the waters of our intellect. Upon the topic of lyrics we would definitely like to incorporate them within our releases yet as of late we have rushed our ephemera. Those who seek to gaze upon our text must simply contact us.
SKORPIUS: I think I’ve always been drawn towards art, literature, and film that explores abstract, supernatural, and dark or grotesque themes. Some favorites include H.P. Lovecraft, Nietzsche, Stephen King, Clive Barker, David Lynch, Terry Gilliam, Salvador Dali, and H.R. Giger. 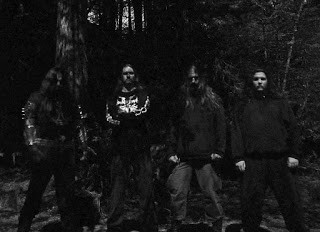 WULF:  I’d like to go back a bit into your past.   Miasmic has been around since 2006, but you finally got a permanent bass player (Altar) just last year.   How did you find this dude, and is he involved with any other bands?   Is the metal scene small there, or were you just waiting to find “the right person”?  Also, you mentioned a few years ago on your Facebook page that you had found a bass player for one of your live shows.   Did this ever work out?  I can only ever find pictures of you guys performing as a three-piece.
LYCANTHROMANCER: The metal scene here is rather minuscule with any worthwhile musicians being transitory (we are located in a college town). Few have been auditioned with none being exemplary throughout the years. Miasmic remained a strong force to be reckoned with as a three piece. However, we felt limited with what we could instigate live as a trio. Until we met Altar. Altar approached us sometime last year & inquired about us needing a bass player. He auditioned, quickly picked up our material, and exhibited the dedication we sought in an initiate without any other musical endeavors. He is a permanent member of our sect & collaborates in the creation process. Hail Altar! While Miasmic remains our primary focus, other projects are active. Iishtok beats skins and bronze for death/grind hounds Sadistic Hallucinations & Skorpius provides artillery for death/thrash horde Infernal Damnation.
https://www.youtube.com/watch?v=VFbuRdkgHRc
WULF:   You released the mayhemic “Spectral Wrath” full-length in 2013. You also recently re-released your first album, “Amongst the Ancient Ones”, which was remastered and also features brand new artwork.   It seems like maybe you felt that the original mastering wasn’t the best, but why the change in artwork?   Who did the art for the re-release?    What are your plans for 2015 and the near future?  Any new music, tours, shows, music videos, etc.?
SKORPIUS: We’ve basically been teaching ourselves how to record music with each release. The first time around, we didn’t really know about things like master bus compression, limiters, etc. so we just released the album with every song pushed into the red to make it loud enough. Once I started learning more about all the steps involved in music post-production, I went back to the original recordings and started messing around with them, just trying to practice and learn more about the whole process. It wasn’t really until I showed the rest of the band my re-mastered version that we decided to reprint the album. At first we were going to use the original cover image, but one day I was browsing on MoonRing Design’s website, and something jumped out at me, so we decided to also revamp the artwork. The back cover is actually the same on both versions of the album.

LYCANTHROMANCER: The latter half of the year will see the unveiling of our third full length offering as well as a west coast tour thereafter. Miasmic will not cease. Our art will only intensify & evolve.