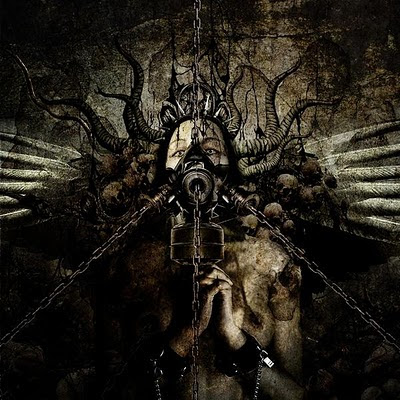 While I expected Bane to sound similar to other Serbian black metal bands such as May Result and the Stone, I was pleasantly surprised at how much I enjoyed this album. This is by far one of the best melodic black metal albums I’ve heard this year, and I could definitely see this band doing well for themselves on the international level.

What struck me as most memorable about this album was the atmosphere, as it wasn’t just “grim and frostbitten” all the way through like so many other albums of the genre. Bane balance things out very well, whether it’s the feeling of forgotten majesty in slower songs such as “The Haunting Presence”, the icy melodies of “Pandemonium” and “Inherited Infection”, or the creepy, carnival-like overtones of “Abhorrence”. Furthermore, it’s worth mentioning that those of you who are allergic to cheesy keyboards need not fear, as keyboards on this album are used sparsely and only in intro tracks (like in the awesome, early-era Mortiis-esque “Awakening of the Evil Spirits”, and “Dysthymia”, which recalls Ildjarn‘s ambient stuff). The ominous acoustic guitar melody in “Lost Shadows” is a nice touch as well, as it only further reinforces the album’s atmosphere and also provides a brief break from the intensity.

While the songs are catchy, dark, and pretty much all you can ask for in a melodic black metal album, it’s worth calling attention to both the high-quality production and musicianship on this album as well. The guitar playing is flawless, the solos are classy, and the drums are top-notch, without sounding fake or over-produced. The vocals also suit the music quite well, as Branislav’s death metal growl and Khargash’s black metal rasp compliment each other perfectly and give the music another dimension. I could definitely see both black and death metal fans digging this album. It’s also good to see high-quality metal like this coming out of Serbia, as I’m not too familiar with what the metal scene is like there, but if Bane is any indication of the overall quality of the Serbian underground, then I’m excited to see what else this scene has in store for us.

When I first gave “Chaos, Darkness, & Emptiness” a listen I felt that I was listening to a Dimmu Borgir knockoff, and while I’m assuming that Dimmu is a huge influence on these guys, Bane definitely has enough of its own character to separate itself from the imitators. This and Istapp’s debut album earlier this year are, for me, some of the best melodic black metal to come out in 2010. I would definitely recommend this album for fans of Dimmu Borgir, Catamenia, Dissection, Old Man’s Child, etc.