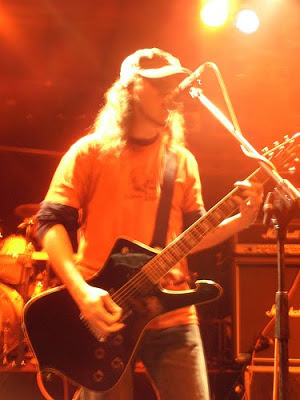 E-mail interview conducted in May 2011.
http://www.myspace.com/darknessinstereo

WULF: Congratulations on completing your first full-length album in roughly four years! I believe this to be quite a strong album. How has the reception been for “Under Saturn Retrograde” on your end?

HM: Thanx. You know, there’s always someone complaining for something on every new album we release… We can’t make everyone happy. We need to be happy ourselves with what we have accomplished with a new album, in the first place. If the others like it, that’s great, otherwise it means they are not ready to understand our evolution. We are getting used to be misunderstood and ahead of trends. Most of people start to like our albums 3 years after their actual release-date. It happened the same with the previous album, “Negative Megalomania”… But of course there is also a lot of people who like our newer releases and we’re getting a good feedback from both press and fans for the new album. It’s still early though to take conclusions, the album has just been released in the USA so we’re waiting for responses from there too.

WULF: Normally I prefer to try and figure out reasons for song titles and album titles on my own, but unfortunately my digital promo copy didn’t come with lyrics and I can’t find lyrics anywhere on the internet. Would you care to explain a bit about the album’s mysterious title?

HM: There’s some meaning behind the album title-track and lyrics. As you might know, according to astrology the influence of Saturn retrograde has basically a very negative effect on life and personal achievements, and it’s partly responsible for failures, pessimism and other negative sides of everyday’ life. It is especially negative when it is in your natal chart. I’m also a Capricorn and Saturn is my ruling planet. Basically I used “Saturn retrograde” as a metaphor. It is meant as something like “being born under a bad star”. I don’t really believe in astrology but I thought the meaning was fitting to represent the sense of oppression and constant bad luck that followed me over my lifetime. The rest of the songs deal with different topics but each one has negativity and hostility as the main themes.

WULF: The album cover is clearly somewhat dark and disturbing, but also quite beautiful. Who is the artist? Would you care to explain your thoughts on the album cover?

HM: The author of the cover is the artist Dani2Hell. I was looking for a suitable cover for the new record, and watching the graphic works she made at that time I was struck by one in particular, so I asked if I could use it and she agreed. I was lucky, because that work suits the emotions portrayed by the album music very well. I then examined several versions of the same design with Dani2Hell and in the end we eventually chose the version that everyone can see now (the one without logo and with darker colors). Also, Dani2Hell had already made the sketches included in the booklet of our “Vol 5: 1999/2009” album, with excellent results, therefore I could say that so far the cooperation has been very fruitful. From my point of view, the figure represented on the front cover is a sort of angel of evil and iniquity, it’s the rational embodiment of an irrational wickedness, which is deeply rooted within the human soul. It’s pure evilness, that’s why that figure on the cover has no visible face… Evil has no face, it’s within each of us. 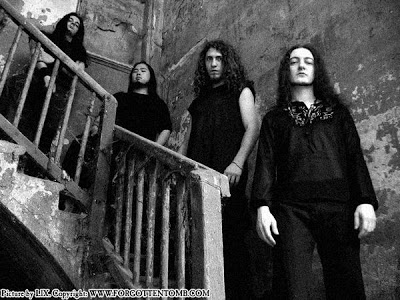 WULF: According to recent interviews you’ve expressed your songwriting being increasingly influenced over the past few years by bands such as Alice in Chains, Down, Acid Bath, etc. Although your cover of The Stooges’ “I Wanna Be Your Dog” is quite well-done, I was surprised that you didn’t cover a band that was influential to you that was more “metallic” in style. Would you like to explain why you chose this particular song to cover? Also, since your cover was so well-executed, is there a chance that Forgotten Tomb will continue to cover more songs on future albums?

HM: We actually started this “bizarre covers” tradition on the “Vol 5: 1999/2009” double-album, with a couple of songs from Nirvana and Black Flag, as well as a Black Sabbath intro. They turned out great, so we decided to include another one on this new album. In the first place, I’m a Iggy/Stooges fan, and I like the nihilistic, self-destructive power oozing from that song. Originally I wanted to do something out of “Raw Power”, since it’s my favourite Iggy/Stooges album and one of my favourite albums of all time, though most of the material was not suitable with the rest of our songs. Also, we have chosen “I Wanna Be Your Dog” because it’s more well-known and also because all the cover-versions we’ve heard from other bands really sucked (including the Slayer’ one, yes). When Slayer did that cover they changed the lyrics to some macho-bullshit and I hated it. It was retarded. Iggy Pop hated it too. I think Iggy would like our version instead. I think we gave it an original Punk feeling, it sounds really nihilistic and violent. I even prefer it over the original! This would have been nearly impossible to do with the “Raw Power” songs, ’cause that album is fucking perfect as it is. Btw, we always choose to cover songs that are not strictly Metal ’cause we think it can be more interesting, both for us and for the audience. I mean, would you prefer another Darkthrone or Mayhem cover as all Black Metal bands do? I don’t think so. Also, we listen to a lot of “non-Metal” stuff so we find more intriguing to cover songs like those and make ’em sound like one of our own songs. 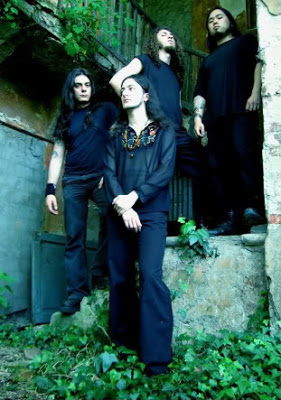 WULF: Can we look forward to a Forgotten Tomb music video for a song off of “Under Saturn Retrograde”? Personally, I would choose “Reject Existence” because I feel that’s arguably the most catchy song (it’s seriously been stuck in my head for days now!) even though it has a quite negative message. Also, are there future plans for a DVD or anything like that?

HM: Actually there were plans to shoot the video for an edited version of that song. We’ll see what happens. Time flies and there are lots of things to be taken care of, so we’ll see if we can make it. A live DVD would be really cool too, but again, we’ll see what happens before the end of this year. Maybe we’ll record another full-lenght album before shooting a proper live DVD. It depends on the success of our new album.

WULF: I’ve noticed that your attitude and style in interviews over the years has changed considerably. I mean no disrespect, but it seems like you’ve become much more “mature”…what I mean by this is that eight years ago, you were strongly advocating suicide and embracing despair and negativity, whereas nowadays it seems like you’ve become somewhat more “laid-back” but still fixated on negativity. I also feel like this is directly reflected in your songwriting. While I haven’t heard earlier Forgotten Tomb albums, according to interviews and reviews it seems like your earlier material was more black metal-oriented…with “Under Saturn Retrograde”, while there is still a black metal influence, it is much more limited, and instead fits more comfortably in its own “depressive rock” style. Do you agree with this? Do you feel like Forgotten Tomb’s sound has matured with you these past few years?

HM: If you read all my lyrics and interviews since the beginning of the band you’ll notice they changed and evolved. But of course I don’t like a lot of things in life and society, and I’m basically a very negative and pessimistic person. The “leit-motiv” of my lyrics is more or less always the same. Obviously over the years people grow up and evolve, though I always believed in what I said over the years and I don’t regret it. The glorification of negativity, death, hatred, pessimism, cynicism, homicide, suicide, abuse and in general of everything that is helpful to destroy human happiness and life is a recurring theme of our albums and imagery, now more than ever. Personal experiences had a role on some of my lyrics in the past but over the years I developed a more mature songwriting. I realized that I’m more useful as a tool to spread negative emotions. Of course there are always my personal thoughts and my vision of life portrayed in my lyrics, but the way of expressing them has changed. In the past some fans just used some of my lyrics as some sort of relief from their personal problems, but I never wanted this to happen. I’ve been totally misunderstood. I don’t want to help people, my lyrics are not propedeuthic. I want to destroy people, I want them to increase their suffering and do harm to themselves and to others. That’s why my lyrics have changed over the years. I don’t wanna write for myself exclusively, I want the message to be loud and clear to all my listeners. You know, when you say these things and you’re 20 years old people use to think you’re a teenager trying to act evil, but when you’re 30 years old and you still say the same things most probably it means you really mean it. I’ll turn 31 this year so go figure… The musical evolution has nothing to do with our concept and attitude, we always listened to other kind of music even when we were more Black Metal-oriented. 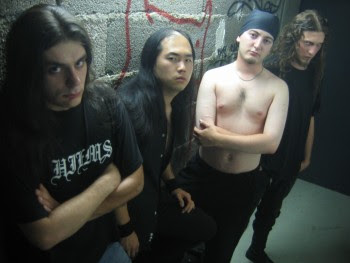 WULF: By listening to this latest album, there’s no doubt in my mind that if you were to decide to tour North America you would be quite successful, as “Under Saturn Retrograde” seems like it has a much more accessible sound and wider appeal than many contemporary extreme metal bands. Are there any plans to come over here and wreak havoc?

HM: It’s very difficult for bands like ours to play in the USA. We’ve been all around Europe several times and I’m pretty sure we’ll play again quite a lot of gigs there this year, but I don’t know about the rest of the world. If there are promoters interested in having us playing in the USA, we’ll come of course. Our aim is to play live as much as possible, so I certainly hope to visit some countries where we haven’t been before.

WULF: Thank you so much for taking the time to do this interview! Any final words you would like to say?

HM: We’re going to release very soon a split 7″ with italian band Whiskey Ritual. Both bands will cover 3 songs each by GG Allin. It’s gonna be a cool release. Then we’ll focus on live-shows/tours and in the meantime I’ll start writing some new material for the next album. To all our readers: buy our new album and get fucked up! Follow us through our usual channels: official website, MySpace, Facebook and Reverbnation. Stay Negative! 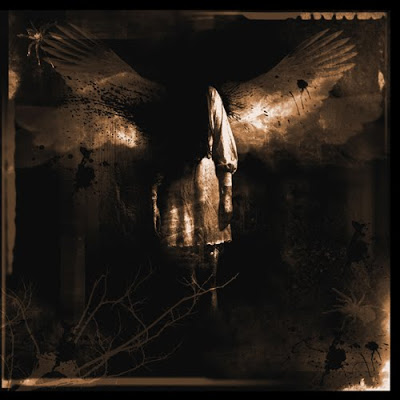