“Ominous Doctrines of the Perpetual Mystical Macrocosm” – Inquisition: The Best Album of 2010 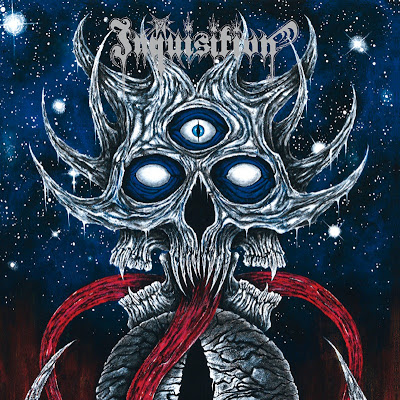 I’ve been meaning to write about Inquisition‘s latest album “Omininous Doctrines of the Perpetual Mystical Macrocosm” for quite some time now, but after seeing this album pop up all over metal critics’ “Best of 2011” lists within the past couple of weeks, I feel like now is the perfect time for me to weigh in on this album with my own thoughts. Before I begin, however, I would like to say that without a doubt this would be my favorite album of 2011, except since it technically originally came out in 2010 I’m not going to include it in my own “Best of 2011” list. Yeah, yeah, it wasn’t on my “Best of 2010” list last year, but I hadn’t heard it until this year and I don’t feel like going back and editing that old post, so whatever.

Anyway, I’m really happy to see this album getting such high praise because I feel like it’s easily one of the best black metal albums to come out in a long time. I know some people are turned-off by Dagon’s Immortal-esque croaky vocals and the lack of a bass (I definitely can’t hear any bass whatsoever on this album, pretty sure it’s just guitars), but besides that, there’s nothing else to dislike! Inquisition somehow come up with pretty simplistic riffs, but MAN are they bitchin’. Whether they’re fast and pummeling (“Astral Path to Supreme Majesties“) or slow, groove-laden, and hypnotic as fuck (“Desolate Funeral Chant“), or a combination of both (“Crepuscular Battle Hymn“), it’s been over a year and I’m still not over them. However, what really drives Inquisition’s “sound” are the vaguely psychedelic lyrics and occult themes that layer the album with a very strong mystical atmosphere, to borrow from the title of the album. If you’ve read any Inquisition interviews, it’s pretty safe to say that Dagon actually seems pretty serious about his shit. Viewing space as the physical embodiment of the anti-cosmic Satanic spirit, mysterious pagan rites, mythical beasts, astral projection, inter-dimensional travel, it’s all in there, and Inquisition’s lyrical themes and mystique definitely contribute positively to their overall sound.

I don’t want to go on for too long blabbing away about how cool I think this album is, just check it out for yourself! I’m pretty sure you’ll dig it!