Home / interviews / Phantoms of the Orient: An Evening with Vhan of Aek Gwi!!

Phantoms of the Orient: An Evening with Vhan of Aek Gwi!! 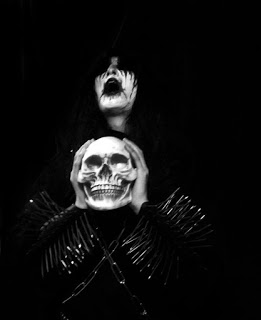 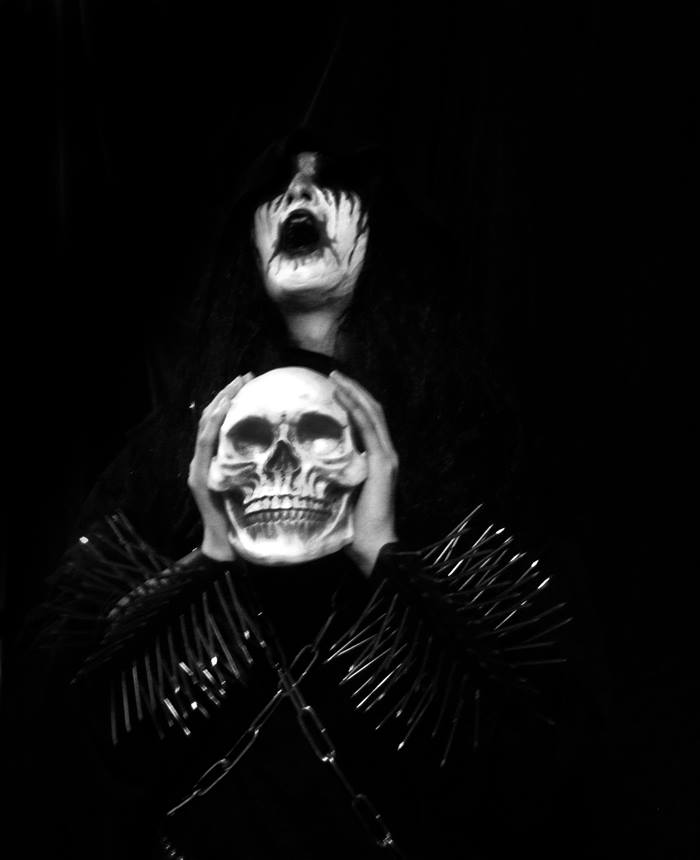 I don’t think I’ve seen the sun in days.   Maybe weeks.   This has actually been a pretty warm December so far here in a land known for its relatively cold winters.   It’s already the middle of December, and so far it’s just been kind of cold and wet outside (except for a brief snow flurry that immediately melted).   While I am excited for the inevitable onslaught of ice and snow (perfect for grim black metal, of course), I’m taking advantage of the current shitty weather situation by listening to a recent discovery in my exploration of Korean black metal– a mysterious entity known as 厄鬼 (Aek Gwi).   The shadowy figure behind Aek Gwi is a veteran in the Korean black metal scene, and gone by several various pseudonyms, but currently he is known simply as Vhan.   Vhan has had quite a lot on his plate within the last few years.   Not only has he been involved in various other bands/projects in the past (besides Aek Gwi), but he also (up until a few months ago at the time of this writing) ran Misanthropic Art Productions (formerly known as The Black 666 Productions) and its sub-label, Berserk Ritual Productions, as well as running and doing artwork for Misanthropic Art Production’s art and design team, Misanthropic Artworks (which, by the way, is some of the best metal artwork I’ve ever seen in my life!!!   Truly amazing stuff!!!   Oddly enough, he’s also done some art and logos for various NSBM bands, but we won’t get into that here).   I’m sure he also has a day job as well.   Busy dude!

As I was saying, I haven’t seen the sun in days.   I can’t tell if it’s because it’s just winter and an especially rainy time right now or if it’s because of the insane amounts of pollution that China has allegedly been spewing all over East Asia (more so than usual), but the outside has either been dismal, cold, and wet, or just surreal, like right now where everything I can see outside my window in this sprawling Asian metropolis seems to have a strange yellow hue.   Anyway, it’s the perfect setting for a Korean horror movie 🙂

Which brings us to Aek Gwi.   The latest album that was released earlier this year, Forest of Ghost (could have used a bit of editing with that title), is some really cool ritualistic black/doom metal, kind of similar to stuff by Nortt, Xasthur, Wormphlegm, Blood of the Black Owl, and maybe even Beherit as well.   I think I’ve talked about this before, but I remember truly realizing the potential of this kind of metal not just as some shit to listen to in a dark room in order to have a quasi-mystical experience (which I wholeheartedly support, don’t get me wrong), but also as a killer soundtrack to play as a substitute soundtrack for movies as well.   I haven’t done this for Aek Gwi yet (not sure which movie or film clip I would pick), but I know at least know for a fact that both Wormphlegm and Electric Wizard make excellent soundtracks to Conan the Barbarian (1982) and Häxan (1922), respectively.

When listening to this album, I feel like it’s absolutely essential to isolate yourself in like your room or somewhere with all the lights out, making it as dark as possible, in order to really get the full experience.   Maybe even light a candle or something.   Next, put on your headphones or earbuds and allow your imagination to wander… 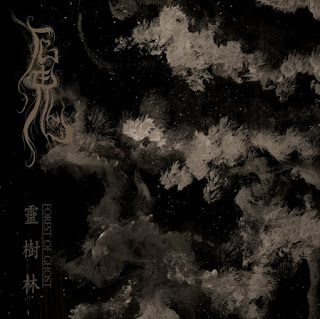 For me, I began to envision a scene which takes place during a rainy, warm summer night at a Buddhist temple in the middle of a forest somewhere in East Asia.   However, inside a strange, perhaps unorthodox, (un?)holy ritual is taking place, in which a small group of monks are attempting to either speak with and/or summon the spirits of the dead.   Eventually, the spirits are conjured forth, but they are malevolent and chaotic, and the monks there begin to chant and play the flute or maybe some other traditional musical instruments in order to try and control, or at least pacify, the spirits so that they can properly communicate.   As to what exactly is supposed to be gained from communicating with the dead in this particular situation is unknown, but the monks are hoping to perhaps at least receive some sort of message or (inevitably) nightmarish hallucination/vision.  At this point everyone is kind of subdued and on their own “trips”, so to speak, as the spirits of the deceased communicate telepathically with them as the temple walls and roof creak and groan due to the heavy wind that has recently picked up (despite the fact that they’re in the middle of the woods).
Interview conducted via internet in December 2015.

WULF: Who are you?   Please give us a brief history of Aek Gwi.   What does “Aek Gwi” mean?   Why do you use Hanja and not Hangul when writing the band name?

VHAN:  Greetings!   First of all, thanks for the interview.   I think this is the first interview for Aek Gwi.   The band name “Aek Gwi” is written “액귀” in Korean and “厄鬼” or “縊鬼” in Chinese (edit: maybe he’s talking about this?  I’m not sure), which is a ghost associated with suicide in Chinese mythology as well as from the Korean novel Toji.   It’s a ghost which brings you misfortune.   In Chinese mythology, the 縊鬼 seeks vengeance or revenge and will drive you to kill yourself by hanging when it appears to you. 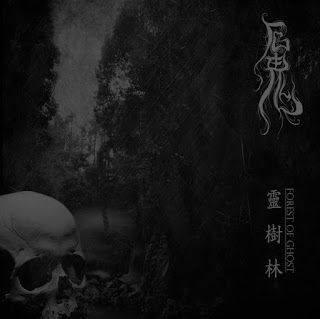 WULF:  Is Forest of Ghost a concept album?   Thematically, I imagine this album is about ghosts, death, etc.   Is it about any ghost stories or metaphors in particular?   What were you hoping to accomplish with this album?   What is the message?

VHAN:  There is no message with the album.   I just made the “Forest of Ghost” album like a horror movie.   I want to expose the concept of Asian ghosts to other people in the world.   In the East, these ghosts are more scary than vampires, zombies, or Satan.   That’s why I chose these ghost mythologies as the concept for my black metal music (joke).

WULF:  Are you interested in Korean ghost stories?   What is your opinion on Korean and/or Asian horror movies in general?   I just watched A Tale of Two Sisters (장화, 홍련) (2013) and thought it was a great movie!!

VHAN:  Honestly, I don’t like Korean ghost movies or stories that much, because they’re really boring and generic/played-out.   There are a lot more bad horror movies than good ones.   There are also ghost stories on the internet too that are obviously fake, and I fucking hate that.   So personally, I prefer classic Western horror movies over the Korean ones.   For me, I was really impressed by the Korean movie 혈의 누 (Blood Rain), which is actually not a horror movie.   The music of Aek Gwi is influenced by the TV series 전설의 고향 (Ghost Stories).   It’s also a classic Korean horror novel which I read when I was young.   The concept of the music of Aek Gwi is also from the Korean folk story 장화, 홍련 (The Story of Janghwa and Hongryeon). 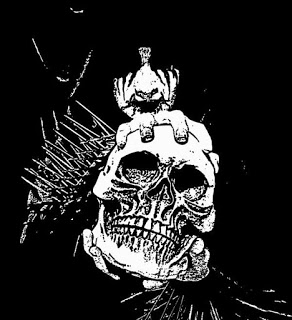 WULF:  Why did you close your label and your art production and stop doing all your other bands besides Aek Gwi?   What happened?
VHAN:  I already have mentioned about my financial situation (as the reason why I had to stop) on Facebook and my label’s website; my domestic economical situation isn’t good. My income has been in bad shape and rent has been rising.  Realistically, I couldn’t keep the black metal label as my primary job in Korea.   I’ve stopped making music temporarily and sold my instruments to make cash, but I will never give up.  That’s why I don’t do the music now.   As for my other band, Origin of Plague, I went back over the music and felt like the music was pretty shit, so that’s why I want to compose again.   As for Aek Gwi, I’m still writing music for that.   If I have some extra time or money then I’ll record more music.   As for my artwork, I don’t have enough time and there are so many people who are better artists than me, so I feel like “what’s the point?”   So I don’t get any orders for artwork, and also I just want to have the freedom to draw what I want, not for a job.

WULF:   Has Aek Gwi ever played live, or is this something that you are interested in for the future?

VHAN:  It’s important for bands to play live, but I’m not going to have a live show because I don’t want to be around people.

WULF:  Do you believe in ghosts, or have you ever seen a ghost?   What is your opinion on death, the possibility of an afterlife, etc.?   Do you fear death?

VHAN:  It would be a lie if I said I’m not afraid of death.   I’ve also never seen a ghost in real life, but I’ve had my own strange experiences.   I kind of believe in the existence of spirits, but not necessarily 100%. 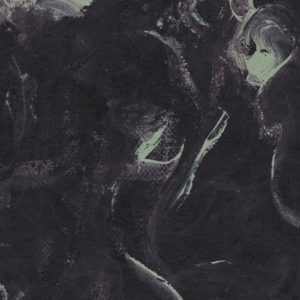 This is the artwork for that upcoming split he’s talking about with 头发河 (Harrfluss), Begräbnis, 纳骨堂 (Ossuary), and, of course, Aek Gwi.

WULF:  Is there any literature you would recommend for your fans to check out which can help us understand your music better?   What books or writings have influenced your music and/or your life?

VHAN:  I already answered this question earlier.   If you want to understand the concept of my music, you can see the TV series 전설의 고향.   I think my earlier music isn’t good because I was drinking and didn’t make enough of an effort, but now that I’m making more down-tempo music and I’m influenced by Beherit, Goatlord, Nortt, Teeth of the Lions Rule the Divine, Enemite, and Hellhammer.   I’m most influenced by the Chinese dark ambient band Enemite.   This is the band that I respect the most.   It shows us what Oriental horror is in a truly extreme way.   Not long ago, Dani of Goatwarex suggested I do a split with the black metal artists Harrfluss (project of Li Chao), Aek Gwi, Begräbnis (from Japan) and 纳骨堂 (Ossuary).   I think this opportunity doesn’t come that often, especially with the best Chinese metal label, Goatwarex, so I’m really happy about that.

WULF:  What are your plans for the future? Why did you decide to stop Misanthropic Art Productions and Misanthropic Artworks? Do you have any plans to revive your other bands or start new bands?

VHAN:  I don’t know about any future plans.   I just have a really busy life, and maybe for some while I can’t do black metal because of my work.   The first thing for me is living a normal life.   Maybe you know this if you live in Korea. 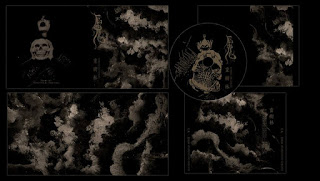 WULF:  Those are all the questions I have, thanks so much for the interview! Any final comments?

VHAN: Thanks for the fun questions, there’s nothing else that I want to add.

Edit:  Of course, before I finished writing this article, it started to snow, which kind of ruined the whole eerie, mysterious vibe I was going for.  Now it’s just an absolutely beautiful winter wonderland outside and makes me want to listen to some majestic frosty black metal or something.   Anyway, winter is no longer coming, it’s here!! 😀

Special thanks to Gumiho (구미호) for help with the translation!