Sergeant D is Coming…AND WE’RE ALL ON HIS LIST

Sergeant D is Coming…AND WE’RE ALL ON HIS LIST December 10, 2013 Judge Dredd
Uncategorized
0 Comment
"Unearthing the Past" by GorgutshipstersIMNsSergeant Dtrendstrveuntrve 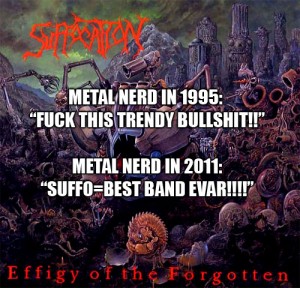 Love him or hate him, infamous Metal (and non-Metal) writer, Sergeant D, has made a valid point about the collective obsession that Metal fans have with the past.

If I may summarize his point, he writes that there are far too many Metalheads who are content to listen to nothing but Metal music from the past and who shun any new Metal music. What’s more, this creates a market for bands who simply follow trends (or revitalizing old trends, such as with Old School Death Metal and Thrash), rather than really trying to do something unique. This aspect might account for the creative stagnation at which Sergeant D points.

In his post, Sergeant D includes two promotional posters for two Metal festivals. The headliners are all at least 10 to 20-year-old bands. Most of the headlining have also never really strayed from their trademark sounds.

I do certainly agree that Metalheads (especially IMNs) are too quick to dismiss new and experimental sounds in Metal. One can even look as far back as “Focus” by Cynic (truthfully, probably even farther). They toured with Cannibal Corpse after they released that album, and you can easily search on YouTube for live footage from that tour where people in the audience are audibly booing Cynic. In the present day, “Focus” is one of the most revered albums in the Death Metal genre (if it can even really considered Death Metal) and its influence has traveled far and wide.

So obviously, this conservative nature of Metal fandom is not new. Bands that are exceptionally avant-garde or simply doing something new and interesting are often cast aside for whatever is hot at the time.

Of course, one should point out that there is a canyon of difference between dismissing new music because it’s new, avant-garde, or experimental, and dismissing it because it just doesn’t line up with your musical preferences.

In many cases, it seems like words (used by IMNs) used to criticize are the same in both instances: “untrve” or “gay”. The most recent example that comes to mind is Deafheaven’s “Sunbather”. OK, it’s straying from the black metal (some may even say post-black metal) form with brighter tones and more triumphant highs than most other Black Metal. What happens? It gets pummeled by IMNs.

Now I will totally acknowledge that the criticism of “Sunbather” is also partly due to the fact that it has become the Metal baby of 2013 for “hipsters” – but this is also part of the issue. To IMNs, if it doesn’t appeal to their most kvlt or br00tal musical preferences, then it is “untrve” or “gay”. By the same token, if it appeals to an audience outside of the Metal community, it is also “untrve” or “gay”. Is “Sunbather” a bad album? In my opinion, no. It’s one of my favorite albums of 2013. You might think it’s a bad album, because it doesn’t align with your musical tastes. But it’s hard to deny that they are pulling, if ever so slightly, the Post-Black Metal form in a new direction and that is something commendable.

To give another example, I am not really a fan of Kayo Dot’s music. However, I respect them for their experimental nature and the way that they completely fuck with what our preconceived notions of heavy music should be.

In turn, this all creates a chasm of creativity: not many bands are willing to try something new or at least experiment with the form, because it’s just easier to get accepted doing something everyone else has heard before.

However, Sergeant D failed to point out that EVERY genre of music has its purists and conservatives. That’s just the way it works. Even what I would consider some of the most “progressive” music genres have their purists. For example, I would consider Jazz a very progressive genre of music. However, one needs to look no further than famed trumpeter, Wynton Marsalis, to see its puritanical side. Marsalis plays a very old style of Jazz and refuses to adapt. Many of his critics say that it’s as though Marsalis doesn’t realize that new Jazz music has come out since 1965.

In any case, it doesn’t make puritanism right in any musical genre. If you don’t think art should progress, you’re just ignorant.