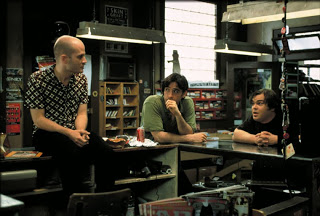 One of the most annoying things I find about myself is that I can get fairly obsessive about “completeness”. I’m not even entirely sure how to explain it…but I do know that a lot of times it results in me not being able to keep up with shit or constantly failing to meet deadlines. For example, if you haven’t noticed, almost every metal magazine and blog has published or posted their own “Best of the Year” lists. For me, I can’t release mine until January 1st of the next year because there’s something in my brain that has convinced me that it’s entirely possible there will be an album released on December 31st of this year that will obliterate the fuck out all the other albums that made everyone else’s lists. You might think this is a little ridiculous, but just look at Nokturnal Mortum‘s “The Voice of Steel” (2009). Yeah yeah, they’re a controversial group because their extremist right wing ideologies and political affilations and probably wouldn’t have made a lot of critics’ lists anyway because of it, but STILL!! It’s an absolutely killer album and easily one of the best metal albums of 2009, which happened to be released on December 26. If I would have made my Top 10 list early and missed it I would have had to either edit the list, which is annoying and kind of pointless after everyone’s already read it, OR I’d have to make some goofy new post about how it should have been on my list to begin with or whatever. I guess the latter isn’t so bad since its absurd to be expected to somehow have listened to EVERY album that came out, but I guess that’s why I have a problem to begin with. I’m convinced that if I hold out for just a couple more days I’ll be able to somehow come up with a better list after discovering some obscure, yet amazing record, or re-listening to an album I previously thought was shitty and finding it to be mind-blowing. Even this rant is starting to get pretty irritating.

Anyway, I just came on here to write a quick post about how my Top 10 is going to be a little late this year! The main reason actually isn’t because I’m holding out until the new year (although that’s something I’d do anyway out of principal), but because my headphones are kind of fucked up right now and it’s going to be a couple weeks until I can get them fixed up and make sure my list is solid. That’s another kind of annoying thing…in order to truly judge an album’s quality, I have to hear it on headphones! Computer speakers, a tablet, a phone…nope!! Anyway, for everyone out there eagerly anticipating my list (i.e. Judge Dredd), just know that my list will be out soon!!  So should we leave it at that? 😉
Next Post
Previous Post
Next Post
Previous Post