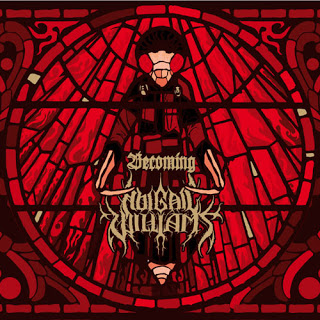 I don’t know what the deal is with me wanting to defend shit that no one likes. I already white-knighted Liturgy in an earlier post on here, and I’m not ashamed to admit that I really like Celtic Frost’s notoriously shitty “Cold Lake” (“Seduce Me Tonight” fucking rules) and brain-dead guttural slam (Cephalotripsy, Devourment, Cemetery Rapist)- shit that makes internet metal nerds freak the fuck out. Maybe I feel bad for the artists for some reason? I don’t know. Obviously there’s shit that’s terrible that I’ll 100% agree is lousy (such as the latest Morbid Angel album, Cryptopsy’s “The Unspoken King”, “St. Anger”, etc.), but I feel like there are times when you can tell an artist or band is super into their shit and really, REALLY want people to like it. This kind of desperation is a turn-off for most people, but at the end of the day for me it has the opposite effect. I guess I’m one of those “it’s not THAT bad” kind of people, but whatever.

My point is that Abigail Williams is one of those artists that I feel gets a lot of hate for superficial reasons. I should probably preface this argument by saying that I haven’t really done my homework on this, I haven’t read too many interviews with these guys and don’t know too much about them, so this might just be a stupid argument to make. Anyway, here’s what I know about them:
1. They started out as a shitty blackened deathcore or whatever group (I haven’t listened to their early shit, so I’m going off of metal-archives).
2. They tried to establish themselves as more legit by putting out “In the Shadow of a Thousand Suns”, a more “symphonic black metal” effort which featured Trym drumming on some tracks.
3. Still not being taken very seriously and compared to Cradle of Filth and Dimmu Borgir, they decided to strip down their sound with a less-overblown, more “evil” atmosphere with their second album, “In the Absence of the Light”. Still received mediocre reviews. At this point they’ve already gone through a shitload of lineup changes as well, and have been getting booed at live shows.
4. Recently put out “Becoming”, which is one of the best albums that I’ve heard so far this year.

Seriously! I don’t know if these guys started doing heavy-duty hallucinogens and/or just started listening to a lot of Wolves in the Throne Room or Altar of Plagues, but something’s up. Whether or not these guys are totally ripping off this whole “post-black metal” trend or not is besides the point– “Becoming” is an excellent album, and even though they’ve clearly jumped on a bandwagon, it’s original enough to appreciate in its own way.

While there’s plenty of “atmospheric” touches to Abigail Williams’ new sound, conspicuously absent are the band’s old trademarks of symphonic flourishes and polished production. Instead, while there are plenty of gorgeous melodies and beautiful string arrangements, the album has a gritty production quality to it that goes perfectly with its “dark” BM riffs and ominous ambient moments (listen to the beginning of “Beyond the Veil”!) and well-placed psychedelic moments.

I seriously would have never guessed this is Abigail Williams. I’ve listened to their two previous albums, and wasn’t very impressed. I’ve read reviews of their live shows, and the general consensus I came across was that they were boring. My buddy told me that at the show he was at they got heckled by the audience. After putting out this album, I can’t imagine these guys still sucking live since it’s obvious that “Becoming” has the two essential ingredients for greatness the band has been lacking this entire time– passion and inspiration. By listening to everything from Ken Sorceron’s howling screams and growls (someone else mentioned Xasthur or Leviathan, I can see that) to the energy pulsing from the drums, it’s obvious that these guys were FEELING this album. I have no idea what the lyrics are about on this album (I’ve noticed there’s a significant lack of contemporary interviews), but clearly they’re not phoning this shit in.

The musicians’ performances are also all top-notch, and while nothing specifically stands out as amazing, it works to the music’s advantage by maintaining the listener’s focus on the music as a whole. I mentioned Altar of Plagues before, but that’s who comes to mind most when describing Abigail William’s musicianship. Personally, I didn’t find “Mammal” to be a work of musical virtuosos, but they obviously don’t suck either (the same could be said for Wolves in the Throne Room too). Saying they “get the job done” implies that they’re kind of shitty at what they do, but that’s not what I mean. When listening to “Becoming”, you’re not distracted by any musician in particular, just the “vibe” of the song. Eh, you know what I mean.

While I can see a lot of metal fans putting these guys down and not giving this album a chance (understandable, to a certain extent,) I’d say that by writing these guys off you’re missing out. Obviously, I was blown away by “Becoming”, and I hope by checking this album out you’ll be as pleasantly surprised as I am. I can’t believe I’m praising this album as much as I am, but as much shit as these guys have been through by internet metal nerds like myself, they definitely deserve it.