Home / interviews / Interview with Johnny Roberts of Woe of Tyrants!!

Interview with Johnny Roberts of Woe of Tyrants!! 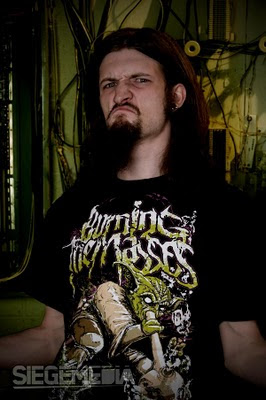 WULF: First of all, I want to say it’s a pleasure talking to you. I really like the new album, “Threnody”. I was actually blown away by your last album, “Kingdom of Might”, so it’s great to see that you guys pulled off another great record. How has the reception been so far on your end for this new album?

JOHNNY: It’s been pretty cool, especially given the time that we had to record the album. We had only two or three months in total to write it and only two and a half weeks to record. We didn’t really know what the response would be since we brought in a bunch of new ideas so we didn’t know how people were going to receive some of what we had written, because we knew it was a bit of a different direction. I’m glad that a lot of people have been digging it though. Especially the new material live. It’s been going over pretty well so far. We’re thankful for that.

WULF: Good, man! I hadn’t heard of you guys before the last album and so when I got the digital promo for it from Metal Blade, I was like “whoa! Who are these guys?!” It was great to work out to also.
(laughs)

WULF: While I liked the whole album, right now I’m really digging “Venom Eye”, which is badass because you guys got Dusty from Between the Buried and Me to be on it, also. “Singing Surrendur” is also really beautiful. As a side note, just out of curiosity, who programmed or played the synth parts on the album?

JOHNNY: That was our singer (Chris Catanzaro), he does keyboards on the side. He actually learned how to play keyboards while we were writing and recording “Kingdom of Might”. He just really stuck with it and it got to a certain point where he was writing some pretty cool stuff. We were on the road for the better part of 2009 before we started writing for “Threnody”, and he had some cool parts and some ideas and (so) once we started writing we were like, “Hey man, you can write the parts just as long as you can play them live.”
(laughs)
We can throw in whatever, so he had some ideas and Jamie King, our producer that we went in the studio with, and he collaborated with (Chris), so to speak. He had all the stuff in the studio for keyboards and (we used them) in a bunch of songs. 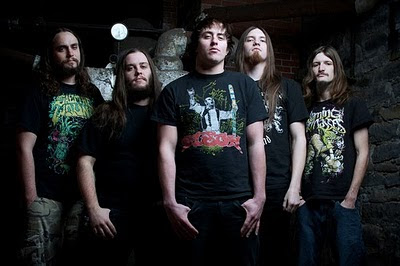 WULF: Yeah, it’s cool man. I’m actually going to get to Jamie King in a second because I had some questions about him, but what song on the album would you say is your personal favorite, or which do you feel turned out the best?

JOHNNY: It changes a lot, there’s a lot of songs…I would say, overall, “Lightning Over Atlantis”. That song is a song that our rhythm guitar player, Matt, and I wrote in a matter of days and we pretty much come up with all the original ideas. He had a bunch of the riffs in the song already laid out when we started writing it and structuring it together and it just sort of went with the flow. It didn’t change much over the first two days of writing it but we went in the studio and (put) the solos on top of it and whatnot, but I think that song, as far as the production and the ideas with the whammy he does in the beginning and everything, I think that turned out to be my favorite. 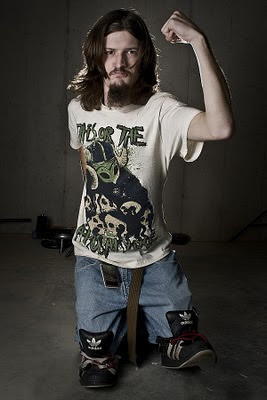 WULF: Right on man! Yeah, I was surprised, “Kingdom of Might” came out at like the beginning of last year, and we’re not too far into 2010 and already you’ve got this new album. I think that’s saying a lot, considering also that your music is pretty meticulously put together, really technical, so I want to congratulate you on getting that done, it’s a pretty amazing feat. So, my question is: did you have any difficulty during this recording process? Since your songs are pretty technical I would imagine it might be kind of hard to nail in the studio, not to doubt the technical ability of you guys, but you guys are playing some pretty challenging stuff.

JOHNNY: Yeah, we all pretty much made sure we were keeping our heads in the game and even during the writing process (which) we started in August and we had the tour with God Dethroned (from) the middle of September to late October, that was like a (month-long) chunk out of the writing process to go on the road so we did a little bit of writing while out on the road but we came right back home and started writing throughout November, then recorded in December. So it was a very stressful three or four months total and so we had to all make sure our heads were in the game, we were practicing every day, like six to eight hours a day writing this music. We didn’t have anything else to do so (when we came) home from tour we were like, “fuck, we really gotta go in with this.” So we did that for awhile and by the time we hit recording actually and got in the studio, we had been playing so much that a lot of the stuff was pretty much in our heads, but some of the songs were painless, even the songs that were the (hardest to write) were the ones that we were playing the most and were the easiest in the studio. We pretty much went in and laid the tracks down pretty easily. All the drums were done in one day, the first day that we were in there.

JOHNNY: Yeah, we we did like four of five hours of recording. I had been playing so much at that time I was just warmed up. I just went in there, drank some Mountain Dew, and got it done. (As for) the guitars, there weren’t very many parts that (Nick) Dozer, our lead guitar player, got stuck on or anything.

WULF: What was it like working with Jamie King?

JOHNNY: He was a beast, he was awesome. He really gets ideas, once he was going through the drum tracks and guitars and whatnot. As far as production and his end of the spectrum, we didn’t have very many ideas. We were so busy writing the music, we were like “any input is appreciated”, and he knew that and (inaudible). He did the track “Venus Orbit”, the instrumental track on (“Threnondy”). Dozer and (Jamie King) wrote that one together. King did a lot of the percussion and instruments on there, he did most of that. When recording, he got the best take out of everyone. He was very good with (our vocalist) and our vocal production and all that too. He definitely knew what we were going for. 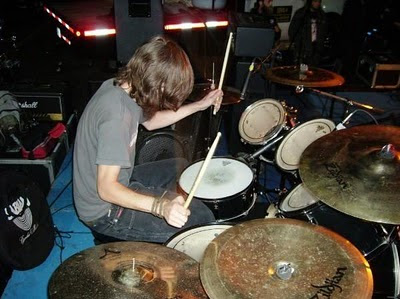 WULF: That’s awesome, man! So I noticed that you guys are from Chillicothe, Ohio. I was kind of curious, what’s the metal scene like there? I would think there would be a lot of black metal bands from there because according to Wikipedia it’s a designated “Tree City, USA” by the Arbor Foundation, but what would you say?

JOHNNY: (laughs) There’s definitely not black metal. There’s tons of like, southern and country (people). There’s all kinds of country people. Some of our original members were from the hills of Chillicothe. Our original lead guitar player that was on “Kingdom of Might”, he was real big into blues and country, and that’s actually what he’s doing now. He’s probably rocking out on an acoustic guitar (right now). As far as metal goes, it’s pretty dead. There’s isn’t much going on here. There’s newer bands coming out now, recently, now that the scene has started picking up, but we were one of the only death metal bands to come around (from) there. (There was) one other death metal band, In Despise, who has since broken up. There’s not much of a metal scene in Chillicothe, you have to travel north to like, Columbus. (It has) a bigger metal scene. There’s not too many venues around here, it’s since changed in the past five years or so once we started.

WULF: So you just finished up a tour with Overkill, Vader, God Dethroned, Warbringer, and Evile. How did that tour go? And which was the craziest city that you guys played in?

JOHNNY: (laughs) Well, the tour itself was crazy. Obviously, it being a six-band package, it was a long show every night, which is not at all a bad thing with all those bands because if you checked out every one of the bands it was really crazy. Really good music, real fun nights all the way through tour, but I’d have to say the craziest night was the very last night of the tour in New York City. You probably heard in the news about the whole bomb scare. We played there that night, the night that they found the Pathfinder. The show’s going on, and we were playing right around when they found it at 6:30, and our guitar player went outside (after our set) to get something to eat and all that stuff started going on and they started blocking off (the streets). The Pathfinder was sitting right at 25th and Broadway, which is the address to that venue, so there was a show with like 1500 kids going on in the basement of this place and they knew they couldn’t cancel the show so it just kept going on. Once the show was over we couldn’t get our vans anywhere near the venue to get our equipment or anything, man, it was ridiculous. We just had to wait to the next day until everything cleared up. Aside from the stress of that huge show going on that was undoubtedly the craziest show on that tour, and then that stuff happening on top of it was just…a way to end the tour, you know?
(laughs)

WULF: Damn, man! That’s nuts! OK, so I know we’re running out of time, but I’ve got one last question. So of all those bands you toured with on Killfest 2010, who would you say was the craziest or rowdiest band behind the scenes?

JOHNNY: (laughs) I thought it was pretty chill, there was lots of work and it was a really busy tour, but any time we had a chance to hang out and party I’d have to say Warbringer, man. Those dudes are crazy. Even if we had work to do, they’d find a way to hang out and party while we were doing it.
(laughs)
It was just like a huge party whenever we were hanging out with those dudes. They’re real good friends (of ours).

WULF: Cool, man. Well, right on, I know that we’re out of time and you’ve got another interview to do, so anyway I just want to say thanks so much for taking the time to talk to me! Hopefully sometime here soon we’ll be able to see you here in Lawrence or Kansas City!

JOHNNY: Oh, for sure man! 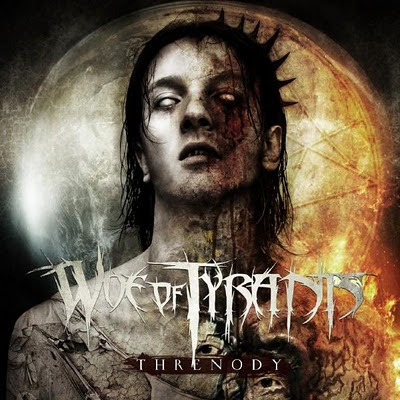