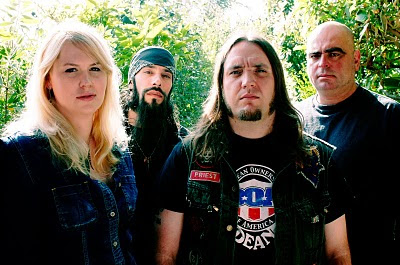 I made a huge mistake when preparing for this interview. For one, while I had listened to a lot of the album, either I was distracted or just not paying attention and mistakenly thought that the song “Sundown” was on Fireball Ministry’s latest self-titled album. I thought this because the video for “Sundown” was posted on their Myspace page and I just assumed that it was a video for their first single off of their new album. When Reverend James called me on it I felt pretty stupid…while I’ll admit that I was a bit rushed when preparing for this interview, I’ll never make THAT mistake again!!

WULF: It’s great to talk to you guys, I’ve been a fan for awhile now…I’m sure you guys hear that a lot! It’s a pleasure to talk to you, thank you for taking the time to talk to me. Anyway, this new album is great, it’s definitely perfect for this nice weather that we’ve been having, at least here in Kansas…I don’t know about where you guys are. It’s definitely music to listen to outside with friends, partying or whatever. I’ve definitely been enjoying it. How has the reception been so far on your end (for this new album)?

JAMES: After you’ve been a band as long as we have, people either get it or they don’t. I think most people seem to like the record a lot. It seems to be really positive, wouldn’t you say Emily?

JAMES: You’re going to get your occasional naysayer…

EMILY: Well I think once everyone starts comparing (the new album to older ones), and it’s like a different thing if you’ve only put out one record or it’s your second record and there aren’t as many expectations or what people think you sound like. This is our fourth record so we’re definitely getting that it’s more of a body of work when people are considering your past records when they’re hearing this new one.

WULF: Right. It definitely sounds like Fireball Ministry, but it’s a little evolved as well (compared to) the earlier stuff too. Anyway, I had a tough time choosing my favorite songs but I would say my two favorites are “In Their Own Right” and “Sundown,” just because I’m also a sucker for singles and really catchy stuff.

JAMES: “Sundown” was from a different record, I don’t know what’s going on here because this is the second interview we’ve done today (where somebody’s said that).

WULF: Oh! Well that wasn’t what I’ve been playing but I watched the video for it and so I thought it was still from the same album! I’m familiar with (this new album) as far as the songs I’ve been playing, but I went on your Myspace and I saw the video for “Sundown” so I assumed that was on the album at some point…sorry about that! What would you say is your favorite song on the album, or which song do you feel turned out the best?

EMILY: We just made a video for “Butcher, Faker, Policy Maker”, so that should be done in a couple weeks…that’s one that I’m excited about. I love ’em all, but I (really) love that one.

JAMES: Our songwriting process is definitely a communal effort. You kind of put your own little things into them and hope that they turn out great or whatever, and on this record I really think we concentrated on every song, not that we haven’t in the past, but this time around we would write three or four songs and then record those songs so that we were just concentrating on those songs instead of trying to record 12 songs at a time.
(James said something else, but unfortunately when transcribing this interview I realized the phone cut out briefly and I can’t retrieve what he said…)

WULF: What would you say then was the most difficult track (to record), or did you have any trouble recording at all?

JAMES: Not really.
(laughs)
I mean, by the time you go in to record you kind of have it mapped out and figured out.

WULF: Yeah, definitely. What was it like working with Andrew Alekel?

EMILY: He actually worked with us on (our second album) “The Second Great Awakening”, he engineered the record. He’s been a friend of the band for a long time so we were very comfortable with him.

WULF: That’s awesome! I hadn’t really heard of him before but I looked up him (on the internet), he’s done a lot of stuff! That’s really cool that you guys have been working with him. With this new music video that you’ve been talking about, what would you say is the basic premise behind it? What was it like working on it?

EMILY: It’s a performance-based video. The same director, Brandon Trost, that did the “Sundown” video did this one, so (for this new video) we were just playing and rocking and doing what we do, basically.

JAMES: Brandon said he wanted to make a video that was reminiscent of the cinematography of (the movie) “Raging Bull”. Most of us in the band are pretty bullish, I think it worked out well.

WULF: Awesome! I know that you guys are hosting the Golden God Awards, is that tonight? Is that right?

WULF: Oh, you’re presenting! I see. Congratulations on that, that’s really bad ass! What would you say are your plans then for the future, are you going to be going on tour anytime soon?

JAMES: We’re trying to take our time, getting our stuff together, making sure that we have the right package and everything together for when we go out because (things aren’t) so hot for the ol’ music business. We’re trying to base our decisions on what’s going to be the most beneficial to us and the people that want to come out and see the band. One of our big things is that we’re planning on getting started here at the end of the summer and we’re just kind of waiting it out to see (what’s going to happen), weighing out our options now before we commit to anything. 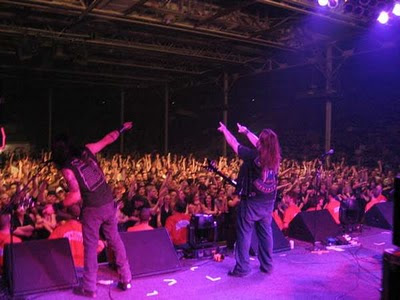 EMILY: I always enjoy playing in Lawrence, Kansas! It’s one of my favorite places to play!

WULF: Yeah, we’ve got good wings and good barbecue, for sure! That’s awesome.

JAMES: There was a band on Arista (Records) a long time ago called Stick that was from Lawrence, Kansas that was really good.

WULF: Oh, really? I haven’t heard of them.

WULF: Yeah, I don’t know. I’ve lived here all my life except I was gone a few years ago, I was going to another school. But yeah, Stick…I’ve never heard of them. But anyway, where would you say, besides Kansas City and Lawrence, of course, would you say is your favorite place to play, or who has the craziest Fireball Ministry fans in your experience?

WULF: I’ve noticed that a lot of people say Montreal…what about Europe? You guys have toured Europe, right?

JAMES: Uh-huh. Definitely the UK, I would think. It’s just the crowd, the people… it just seems like they’re super-duper into seeing live music and loving live music. We had a great time there.

WULF: Well, it is the home of Black Sabbath, after all.

JAMES: Not to mention a thousand others. 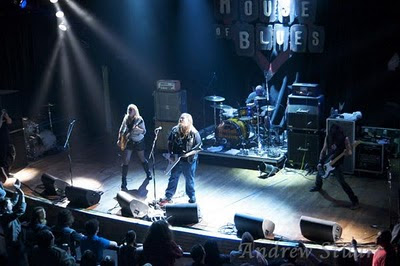 WULF: Yeah, Electric Wizard, (etc.). So in your experiences who would you say is the craziest band that you’ve ever toured with?

WULF: Was it one of you guys that got arrested?

JAMES: (mishearing my question) It wasn’t actually him, it was his band!

WULF: Oh, no, I meant was it somebody in Fireball Ministry?

JAMES: No. We don’t talk about that.
(laughs)

WULF: I got ya. So you’re taking your time to go out on tour, are there any plans for making a DVD soon or anything like that?

JAMES: No, I mean, we just had a new record that came out this month and we’re kind of (inaudible), making sure everything is done properly and everything gets the dues it deserves…trying to do things very intelligently this time around.

WULF: Did you have bad experiences in the past or something with things?

JAMES: The record company experience wasn’t that amazing. This time around when we put out the record we tried to do as much of it ourselves and we got distribution through a good friend of ours who runs the label called Restricted Release. We’re trying to keep it as close to the belt as we can.

WULF: That was one thing I was kind of curious about because I know that in the past at least Fireball Ministry was signed to Nuclear Blast and so are you guys not signed to them anymore and now you’re through Restricted Release, or is Restricted Release (just a distributor)?

JAMES: Yeah, we’re not with Century Media or Nuclear Blast or any traditional record label anymore. All record companies do is make you frustrated and take your money so I don’t see how that’s good for anybody.

WULF: Right. And I guess with the internet now there’s downloading which I’m sure is a double-edged sword because on the one hand you don’t really need the record labels so much anymore, but on the other hand it kind of hurts sales and stuff too.

JAMES: If you sell 20,000 records and you’re on a record label, the record label is probably going to take 75% of that and count 100% of that money in recuperable costs, whereas if you only sell 10,000 records but nobody’s taking the money except for you, then you have enough money to sustain the band and keep making records. Cutting out the middle man has really made a difference.

WULF: Well that’s awesome, it’s good that you guys were able to get out of that and that you’re in a position that you’re really enjoying. Well anyway, that’s all the questions I have, but I just (want to say) have a great time tonight at the awards, and that I wish you great luck in the future and hopefully we’ll see you here in Lawrence, Kansas or maybe Kansas City. Thank you so much for talking to me! 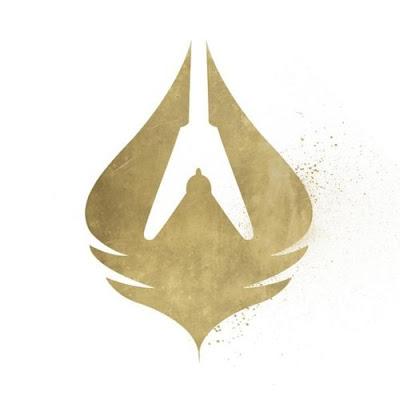