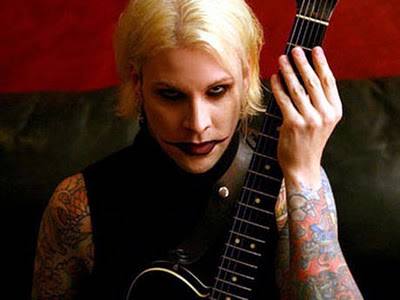 Phone interview conducted in late May, 2010.

WULF: So I’d like to start off by saying thank you so much for taking the time to talk to me, when I got your CD, I knew who you were, but when I started doing research for this interview I had no idea (that you’ve done so much stuff)! It’s insane! So anyway, I’d like to start of by saying I’m honored to talk to ya. So my first question for you is…this might be kind of dumb, but I looked around and I couldn’t find an answer for it…why the name “John 5”?

JOHN 5: Well, when I joined Marilyn Manson I was the fifth member and it’s also a Biblical meaning. So I always kept that name because of the fact (that)…you know, it’s just like if Ace Frehley left Kiss and he would change his name when he left Kiss to Paul Frehley, his real name, so I just kept the name because people know me as John 5. So I always just kept that name.

WULF: Yeah, I wasn’t sure, because I read on Wikipedia that you got that name when you joined Marilyn Manson, so I didn’t know if it had to do with a serial killer or something, but I guess it’s kind of the opposite, then. Alright, so I’d like to say that the new album is awesome. I really like it. I knew you were a good guitarist, but I had no idea that could shred, like, amazingly. I was pretty blown away, and also by the versatility of the album too. While I’ve seen on your website and on Myspace that the album’s gotten good reviews, I’d like to ask, for you personally, how do you feel the reception, so far, has been for this record?

JOHN 5: Phenomenal, man. I can’t even believe that people are just going crazy for it, and I appreciate all the kind words and everything. It makes me feel great because I put a lot of work into this and I’m just really excited that people are digging it as much as they are.

WULF: Good man! Yeah, because even from the first song, which is actually, probably overall, my favorite track–

JOHN 5: “Nightmare Unravels”, yeah, I mean I love ’em all, but that one has a little but of everything, so I’m really psyched for it. 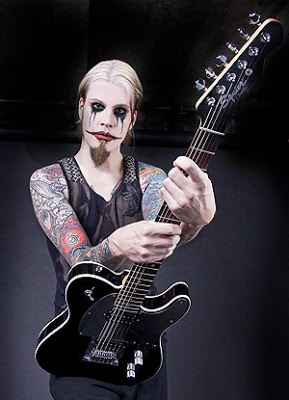 WULF: Yeah! Now, what I want to know is, because I’m interested in “behind the scenes” stuff, but was there a track in particular that you found to be more difficult than the others, like, to nail in a certain take or something?

JOHN 5: Well, what I did was when I wrote them I would sit at home and practice them for weeks and weeks so I wouldn’t go into the studio and be spending a lot of time, and it was kind of like preparing for a fight or something, so I made sure to really have all my stuff down so I cut all the songs pretty quickly, like, going into “Nightmare Unravels” only took me like, 45 minutes or something to get the guitar parts down because I rehearsed it so much. I just rehearsed, rehearsed, so…

WULF: Also when I was looking at the album art I noticed that there is a “babe” in the album art. I was just kind of curious, is that like, your wife or is that just some model, or–

WULF: OK.
(laughs).
I better be careful about what I say then! No, but–

WULF: No, I was like, wow! I was just kind of curious. So, OK, right now I understand that you’re in the middle of a tour, or at least, on your Myspace it says that you’re playing all these dates with Alice Cooper but then it looks like afterwards you’re going on a solo tour?

JOHN 5: Yeah, it’s called “The Gruesome Twosome” and it’s Rob Zombie and Alice Cooper, and we are going to do the Mayhem Festival in the summertime, and it’s going to be a blast.

WULF: Yeah, and you know, unfortunately, I was going to give you a hard time for not coming around the Kansas City area.
(laughs) 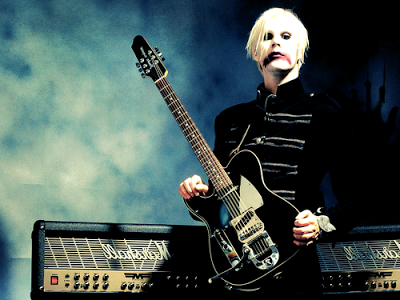 WULF: No, but Mayhem came last time but I know this is kind of a smaller market so, you know…we’re happy for stuff that comes through but…

JOHN 5: Yeah, we’re really looking forward to it, it’s going to be fun.

WULF: Yeah, for sure man! So I want to know right now, how is the tour going for you on the dates that you’ve played so far?

JOHN 5: It’s been one of the best tours I’ve ever done, it’s been a blast! The crowds have been great, it’s just been a lot of fun man. It’s been sold out everywhere. We’ve had such a great time, and we love listening to Alice every night. Sometimes these tours are a drag, but this one is just a lot of fun.

WULF: Really? So some times in the past it hasn’t been as good or whatever, but this time around it’s really killer then?

WULF: Good, man! Well, I know that you’ve played live, like, a zillion times in your lifetime, but I’m just kind of curious, as far as you personally, anywhere in the world…which city, would you say, is your favorite place to play? Which cities do you have the fondest memories of, or who has the craziest crowds?

JOHN 5: Well, I don’t know, you know? Because it’s always different. Let’s say we’re in Kansas City or something and the crowd was really bad last time but it was great the other times…I don’t know, but I love touring in America because everything is familiar. You can always get your favorite things…if you’re in Europe or something and it’s really hard to just get the things that make you comfortable. But I love touring America and that kind of stuff, and (it’s comforting) because I know where everything is. Like right now we’re in Toronto, Canada, and I know where everything is because I’ve been here so many times, so I know where I want to go and where I want to eat–

WULF: And food, yeah I got ya! Because sometimes I ask that question to other people I definitely get a varied response. I’ve noticed that some people prefer the exoticness of other countries, and so it’s kind of an interesting contrast.

JOHN 5: Yeah, I love touring America, and (have access to) things that are familiar to me, it’s easier that way.

WULF: Yeah, no I got ya for sure. Alright, so one of my next questions is…I was kind of curious, for the album trailer on your website, and I saw pictures from another interview that you’ve done on your website, and I saw pictures, I saw video, and I was curious, are you going to be coming out with a DVD that captures this tour that you’ve been doing or anything like that? Like, a new DVD, that’s going to be non-instructional?

JOHN 5: Certainly! Yeah, there’s talk about it, so hopefully if everything works out we will be doing that and that will be awesome because I would want to see it more than anybody. We’ve been filming a lot of stuff and it’s been going really well, and if we get it all done in time we’ll definitely put it out.

WULF: Yeah! And so as far as getting other people to play on your solo stuff, have you ever thought about forming up a solidified, new band? Is that in the process also for stuff that you’re doing? 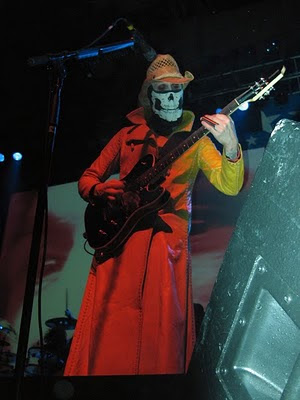 JOHN 5: Well in the future I’m so busy right now with (Rob) Zombie, but I also like doing clinics because it’s free to get into, young kids can come, you can shake my hand, you can ask me questions, you can take pictures, but if I’m in a club or something a lot of people wouldn’t be able to come because it’s 18 and over and (inaudible), and you probably wouldn’t get a chance to meet me, so I like to do clinics because it’s o easier on everybody.

WULF: I see, hence why all the instructional DVDs and stuff?

JOHN 5: Yeah, hopefully it inspires and influences people to go out there, so it’s a lot of fun for me.

WULF: Yeah, yeah, for sure man. I like watching that stuff. I play a little guitar, I’m not any good but I still like watching that stuff too just because I find a lot of that stuff interesting. So one of my favorite questions to ask, just sort of as a guilty pleasure on my part, is I like to know is…you’ve played with so many bands and you’ve done so much stuff, I want to know, who, of all of them, would you say is the craziest band that you’ve ever toured with in your entire history?

JOHN 5: It would definitely be Marilyn Manson. I mean, there’s nothing much that came close to anything as wild and crazy as that. Completely out of hand. That was New Year’s Eve, every night. Totally crazy.

WULF: Wow! Yeah man, I think it’d be crazy too…I think I was in sixth grade when “The Beautiful People” came out, and I think my sixth grade self would probably shit his pants if he knew that that he would be talking to a former guitar player of Marilyn Manson’s, just because back then that stuff was so…I’d hear stories of how crazy this new dude is and so, so it’s cool to hear also that that stuff was for real, too, as far as craziness goes.

JOHN 5: Oh yeah, it was definitely for real. It was craaaaaaaaazzzyyy.

WULF: Because I read also that there was some statement made about how you don’t do drugs and you don’t drink, or at least on that tour…

WULF: Because that’s interesting, also, for you, joining a band like Marilyn Manson or something, that has a reputation for being really nuts.

JOHN 5: Yeah, because they were all “party party party” but I never would, so maybe that was the whole problem, because I didn’t do it.

WULF: Was there any pressure on the road ever?

JOHN 5: Not really, it was fine, but they all went off and did their thing and I just kind of hung out, which was fine, because I’m glad I was there and I did what I did because I’ve done so much since I’ve left, so it’s been quite a journey and I’m really excited about it.

WULF: Well I would think also, maybe, since you don’t do that stuff, so it’s no wonder that you’re able to do so much other crazy stuff and put out so much material, like you don’t wake up hung over and waste half the day.

JOHN 5: I definitely like to get stuff done, that’s for sure.

WULF: That’s really cool, man. Well hey, anyway, I know that you’ve probably got another interview after this, and we’re supposed to keep these around the 15-minute mark, so that’s basically all the questions I have for you man.

JOHN 5: Thank you, I appreciate it.

WULF: Hey, thank you so much for taking the time with me. I wish you the best of luck on the future dates that you’re playing and I think it’s awesome that to hear that this is going really well for you.

JOHN 5: Great, I appreciate it, thank you! 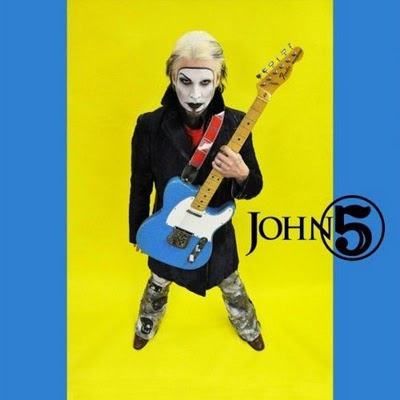